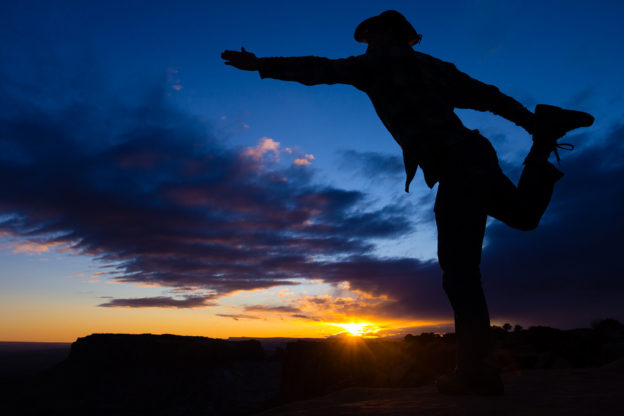 Disclaimer: I am not a doctor. All information here was found in one of the resources listed and linked below, unless otherwise stated as my personal opinion based on my own experience with PTSD.

As yoga becomes more widely practiced in the US and Western cultures, more and more research of it’s benefits is shedding light as to the many different possible applications within our culture. One of the more recent applications that has gained light within the media is the use of yoga as an alternative treatment for post-traumatic stress. There are now multiple organizations that offer training for yoga teachers working with veterans, and there are many other yoga trainings available for treating a broad range of traumas.

But, what makes yoga an effective treatment for PTSD? To answer this question, it is helpful to understand both PTSD and it’s effects on the body as well as the effects of yoga. TLDR: PTSD changes the brain (and other parts of the body). Yoga has been shown to have the reverse effects.

Post-traumatic stress is experienced after a traumatic event when a person feels an overwhelming amount of fear, helplessness, and/or terror, especially if they feel that their life is in danger. It is not the factual details of the event, but it is the individual’s subjective experience and perspective of the event, that can cause symptoms of re-experiencing (flashbacks, night terrors), activation (hyper-awareness, irritability, insomnia), and deactivation (depression, social withdrawal/dissociation, numbing, avoidance).

Post-Traumatic Stress Disorder (PTSD) is identified when these symptoms continue for more than one month.

PTSD does not discriminate against age, gender, race, or any other factors, though it is thought that some factors (genetic and otherwise) can possibly predispose a person to PTSD. The majority of reported cases are female rape survivors. Abuse (emotional, physical, sexual), violence (urban, war), natural disasters, or death of a loved one are other examples of traumatic events that are known to result in PTSD.

If you have been through a traumatic event, please talk to your doctor immediately and get treatment. You are not alone.

The Neurobiology of PTSD

Studies have found that the psychological and neurological symptoms of PTSD are similar to those of some traumatic brain injuries (TBI). The primary parts of the body effected by PTSD are the brain (limbic system), nervous system (sympathetic nervous system), hormones & chemicals, adrenal glands, and thyroid.

More specifically, PTSD affects the neuroendocrine, neurochemical, and neuroanatomic systems. The increased CRH and decreased cortisol levels, as well as the increased thyroid hormones, within the neuroendocrine system lead to increased anxiety, among other issues. Abnormal regulation of norepinephrine, dopamine, serotonin, amino acids such as GABA and glutamic acid, and peptides within the neurochemical system affect anxiety, depression, sleep regulation, and memory.

In short, PTSD has a significant impact on the body and mind. Without healing the physical components of PTSD, it seems there is little hope to heal the emotional.

How Can Yoga Help?

Mindfulness-Based Stress Reduction (MBSR) has been found to increase gray matter of the hippocampus and reduce the size of the amygdala.

Yoga poses (asanas) are correlated with various health benefits, in addition to the benefit of the mindful awareness of the breath and body practiced during a vinyasa (sequence of asanas). Combining poses focusing on one of the body systems mentioned above with mindful body and breath awareness could potentially increase the effectiveness of the benefits known. (#imnotadoctor)

If you are a yoga instructor, you should always keep in mind that any student in any class could possibly be attending your class for the specific purpose of finding healing for trauma. You can see when someone enters the room if they have a physical disability, but mental and emotional limitations are rarely obvious. There is training for trauma-sensitive yoga, which some studios have begun to incorporate in 200 Hr Certification courses.

No matter what class you are teaching, always create a safe place for your students. This is especially important for any students with PTSD. Reinforce your students’ strength in poses such as Warrior II by reminding them that they are stronger than the voice inside that says they can’t do it. Always be mindful when adjusting alignment. Approach a student before adjusting within their line of sight. Respect your students’ bodies and personal space by always asking permission before adjusting.