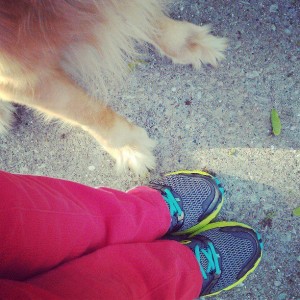 This past Saturday I made my final Couch to 5K (C25K) round of the neighborhood.

I was shocked. Mostly because I could have sworn it was a 9-week program and not 8. (I kept trying to scroll further in the C25K app to look at the final 3 days only to find that it was my last C25K run.) What surprised me most is that I wanted to keep going.

Before C25K, I hated running. I didn’t think I would have much fun doing a 5K run. Now I can’t wait for Race Day on August 24th. I also can’t wait to start my 10K training next week. I learned plenty over the last 8 weeks. About myself mostly, but also about running and fitness. Here are a few of the most important lessons I’ve learned:

Cross training on days when you aren’t running challenges different muscle groups and your running muscles in different ways. Strength training is incredibly important to build up muscles and protect you from injuries.

Pilates and yoga also both helped my running performance immensely. Running power should come from the core (read that in an article somewhere within the last few weeks, can’t remember where), not from the lower extremities. Yoga not only stretched out all the soreness, it also helped to strengthen and challenge my muscles in different ways.

There Is No Shame In Walking

You’ll still build up endurance when walking briskly, but it still lets your muscles and cardio take a breather (literally) if you need one. Don’t push yourself further or harder than your body tells you to. The trick is to decipher between when your body is telling you that you’re about to injure yourself if you keep the pace up and the voice in the back of your head that is saying “I can’t do this”.

Running Really is One of the Best Workouts

I’ve been trying to lose weight for more than 7 months. Before C25K I was doing a lot of Zumba, fitness videos (Jillian Michaels, etc.), strength training, and more. Until I started running, I didn’t see much of a drastic change in my body at all. If you’ve hit a plateau or even a wall in achieving your fitness goals and haven’t tried running yet, do it. Even if you hate running (like I did), it might just be the step you need to take.

I Run Best In The Morning

Strange. I’ve always heard that afternoon is the best time for a workout because you’ve consumed enough calories to make it through. Even more strange to me is how HUGE of a difference it really made in my performance to run in the morning. In the last few weeks, if I ran in the afternoon, I ended up walking most of the time.

I’m pretty sure it was mostly because my muscles were as rested as possible first thing in the morning. It also helped that it was a bit cooler and there was more shade around the neighborhood. So if you’re just starting out, try running at different times in the day. See what works best for you and your body.

My blood pressure started plummeting about half-way through the C25K program. This led to dizziness mostly, sometimes extreme cases of it. I’ve had issues with hypotension before, but no one had ever told me what caused it or how to treat it. Once I read that adding electrolytes to the diet could possibly treat it, I caved and started drinking a 20oz Gatorade with every run. I drank half before and the other half after. I also made sure to drink even more water also.

I tried eating electrolyte-rich foods for a few days instead of Gatorade, but I didn’t feel like I could get enough that way.

But, if you find yourself feeling dizzy after a run, make sure you check in with your doctor first. 🙂